A county that runs….

How the counties of Leicestershire and Rutland have successfully helped hundreds of people to start running.

England Athletics set up the Run England programme a few years ago to encourage more people of all ages and backgrounds to take up running. They also created the Leadership in Running Fitness qualification to encourage individuals to set up running groups that respond to the needs of their local communities.

At the Leadership in Running Fitness course I attended in April there was a presentation by Beverley Hooper, the Running Activator for the counties of Leicestershire and Rutland who told us how she supported run leaders, running groups and clubs. A few weeks after the course I interviewed Beverley to find out more about her role and especially how running groups can provide a route into running for older women beginners. 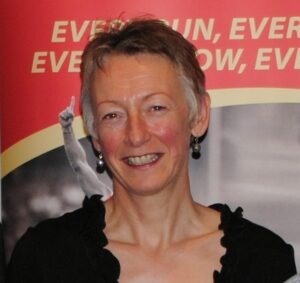 How did you get into running?

I started running in my early forties. I’d always done something to keep fit. Running appealed to me because it’s something I enjoyed doing on the treadmill at the gym and it’s cheap and outside.  I’d also moved house and didn’t know anybody and I was aware this was a good opportunity to meet new people as well.  I went along to a beginners running group with some trepidation but I quickly realised that the other people were just like me, with the same doubts about how capable they were, and that it was a friendly group.  It was a 10-week course and I very much took to running outside.

How did you become a Running Activator?

At the end of the course the group leader asked me if I would like to lead a group of my own.  I was very enthusiastic so I took the training and I went on to lead 3 recreational running groups.  It was at that point that the Network Coordinator for the Leicestershire Athletics Network asked me if I’d like to manage the recreational running project on a part-time basis on behalf of Run England.

What does a Running Activator do?

The aim of the role is to encourage more people to get involved in recreational running in the county.  I encourage and support people to become run leaders; help them set up and run their groups; and form links with local athletics and running clubs.

We’ve developed a community of runners across the county.  In the last two years we’ve recruited around 70 run leaders to deliver recreational running groups.  They’ve all taken the Leadership in Running Fitness course which means they are qualified, insured and credible.  We ask them to run two groups which last 10 weeks each but many of them get such a buzz from doing it that they carry on beyond that.  I mentor run leaders to deliver the group as they wish.  We’ve got 36 active groups and there are as many different styles of groups as there are leaders.  I also provide run leaders with resources to promote their group, and there are opportunities for them to get together to share experiences and learn from each other in our Run Leaders Forum.

We have a Facebook page which is regularly updated with details of lots of different types running events in the county.  It helps run leaders to feel part of the community and runners can see they are part of a bigger thing than just their own group.  It encourages them to think about what else they could do.

Who joins the running groups and how does joining a group help beginners? 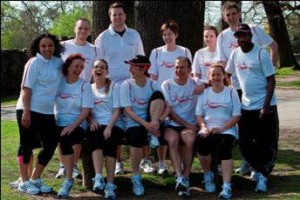 There are more and more people running.  I think the availability of groups with motivated, qualified run leaders is making it easier for women to get started.  Our groups mainly attract women aged between 25 and 55.  I think many women reach a place in their lives where they suddenly open up to the possibility that they could run.  Perhaps because things change at home, they feel the need to get fit or they want to lose weight.

There’s great camaraderie in the groups.  People make connections and encourage each other.  And they get a wonderful sense of achievement from learning to run.  People these days look for a quick fix and external things that can do it for them, with running there is no quick fix and it’s only you that can do it.  The run leader is there to provide structure and encouragement but it is very much the individual’s achievement.

How has the role developed?

We have been very successful at recruiting new run leaders and so now the focus of my role is on working with running clubs to encourage them to consider running beginners courses themselves as a way of recruiting new members and hopefully more people will want to participate in races.

We want to encourage more men, more disabled people and more people from black and minority ethnic groups to join running groups.  We are working with local authorities to encourage them to fund training and run courses for those hard-to-reach communities. 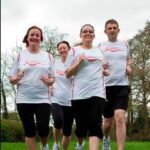 Do you have any words of encouragement for older women who are thinking of running?

If they have any health concerns it’s a good idea for mature women to check out their fitness with their doctor before taking part, but in my view anyone with a reasonable level of fitness can run.  Be aware that it does take time.  Start slowly and set yourself short-term achievable goals.  Join a group! It will get you running on a regular basis, meeting like-minded people and it’s fun!