Spending a whole day at an Iyengar yoga workshop gave me an opportunity to reflect on what I was learning.

Iyengar yoga focuses on precision and alignment in poses, and uses props, such as blocks, blankets and belts, to improve the understanding of the poses, and to help students who have difficulties due to stiffness or injury. It also includes the practice of yogic breathing (pranayama).

I enjoy Iyengar yoga because it is a discipline in which both mind and body are engaged in learning. It is not about attaining perfection, but rather about being continually open to learning and improvement. I appreciate the inclusiveness of the Iyengar approach. The use of props, and individual attention from the teacher, mean that each student can learn and practise each pose, even if they need to adapt how they do the pose. It is an approach which focuses very much on “can”, rather than “can’t” and on strengths, rather than weaknesses.

The workshop I attended was taught by Alan Brown, who has been an Iyengar yoga teacher since 1987.

I had been looking forward to the workshop but on the day I felt fatigued and out of sorts. I wasn’t even sure I wanted to stay. But I found that fatigue had its advantages, as I was able to be in the moment and be receptive to Alan’s teaching. My mind was not busy thinking about other things. By concentrating on being in the class, my negative thoughts dissipated. At the end of the workshop I was still tired but I felt much calmer than I had all week.

Exercise is so often restorative. Using our bodies releases the tension that negative thoughts bring. This reminded me of one time in my early days at Colwick parkrun when I turned up in a foul mood, thinking “the sooner I get this over with, the sooner I can have a cup of tea and go back to bed“. I set a new personal best time by over a minute, and was a lot happier when I finished.

The language of the body

Alan explained that he would not give us detailed instructions for each pose, because this can lead to the student’s mind becoming focused on processing and trying to follow each instruction, rather than focusing on how the body feels. I reflected that this is a bit like listening to a foreign language when you are learning it. If you try to understand every word you will lose the overall meaning. Rather than worrying about what you do not understand, you need to attune your mind to the rhythm of speech, and as you do this linguistic competence will come. Thinking and instruction are part of yoga but bodily competence comes from using your body and feeling what you need to do.

When I ran with my friend John Oldfield recently, he described himself as being “on the edge“. John knew he had pushed himself hard in training that week. John is in his seventies, and by drawing on his many years of experience as a runner, he was able to recognise that pushing himself hard again that week would increase his risk of injury.

Emmanuelle Tulle (“Ageing, the Body and Social Change: Running in Later Life”) describes this “mastery of the body” as a key advantage of experienced, older athletes who understand their physical capacity really well, and have learned how to manage it to achieve the best possible performance. Runners are notorious for running “through” pain, ignoring it and suffering injuries as a result. Mature, experienced athletes may be better at to interpreting pain and discomfort correctly, and adjusting what they do accordingly.

I think the concept of “edges” is also used in Iyengar yoga. Alan encouraged students to accept some discomfort as part of 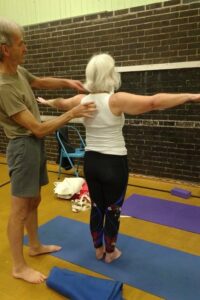 learning a pose. Yoga is effortful. Sometimes practice feels free and easy, and at other times it does not. Through practice we become stronger and more flexible, and discomfort lessens. When adapting a pose for an individual student, Alan repeatedly asked the student to quantify his or her pain, as he made small adjustments to the props that were supporting the student. A small adjustment can make a pose feel possible. If it is not tolerable, an alternative pose may be practised.

Alan talked about attaining a state of bliss in yoga. I’m not sure that I have fully understood what this means, but I interpreted it as the unification of mind and body. This is something that you can experience when running. Perhaps it is the moment when you are “in the zone“. You have moved beyond thinking and are enjoying the sensation of the power of your body. You may be running hard, breathing heavily, and experiencing discomfort, but you feel at one with yourself and your environment.

Adharanand Finn describes this beautifully in “The Way of the Runner“:

“But if we push on, running hard, further, deeper into the wilderness of it all, away from the world and the structure of our lives, the tiredness seems to lift, we begin to float, even if the pain still aches in our muscles. Our minds begin to clear and we begin to feel strangely detached, yet at the same time connected, connected to ourselves. We begin to experience some form of self-realisation.”

With just over a year’s experience of Iyengar yoga, I see myself as a beginner. I appreciate the way that it engages all parts of the body. Practising Iyengar has increased my flexibility. I notice this especially in my shoulders. I believe that it is increasing my functional fitness: the range of movements and the strength that we all need to remain active, strong and mobile into old age. The strength that comes from running is sometimes a help in my yoga practice, and at other times a hindrance, but I find that running and yoga complement each other.

Information about Iyengar yoga in the UK: Iyengar Yoga (UK)

Photographs from the workshop courtesy of my teacher, Emma Harrison: emma-yoga.co.uk

“The Way of the Runner: A journey into the fabled world of Japanese running”, Adharanand Finn (2015)