My sister started running several years ago. As a non-runner I thought it was great that she was getting so fit, but I have to confess that as time went on and she got more into running I did start to think she was slightly mad. What made runners go out and run in the rain and cold? Why was it so important to fit in a training session on a particular day and to do exactly what was on the training plan? How did running become something you can’t do without? And why did runners set themselves all these mad challenges?

Four years and a couple of thousand miles of running later I have to admit that I too have become one of these slightly mad runners. And I’ve set myself a challenge which just a year ago I would not have believed was possible: to run 12 half marathons in 12 months. 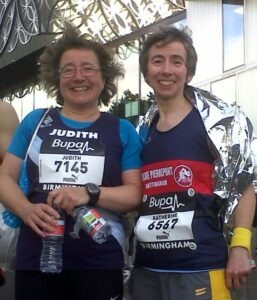 With my sister Judith after finishing the Birmingham Great Run

My first ever half marathon was the Robin Hood in September 2012. I’d been running for  a year and a half by then and I really enjoyed the race because I ran well within my ability and found I was able to speed up considerably in the last two miles. Five months later I ran another half marathon and became aware that some people ran half marathons close together. The idea of doing this seemed strange – surely I would be too tired after the first race to run again three or four weeks later?

After missing out on the Robin Hood Half Marathon in 2013 (see Faster at Fifty?) it dawned on me that there could be some advantages to running two races close together. I consulted my sister Judith who has always been my main source of running encouragement and advice. She pointed out that there would be no need to repeat the whole 12-week training programme, as I would retain my fitness level. If I failed to get a personal best time in the first race I could have another crack at it soon afterwards.

So how did this idea of running two half marathons close together turn into twelve?

I entered the 2014 Robin Hood Half Marathon and then Judith said she was planning to run the Bupa Birmingham Great Run which was due to take place three weeks after the Robin Hood. We don’t often get to run together and I didn’t want to miss the opportunity of running with her.  I’d already been thinking of running a popular local half marathon, the Keyworth Turkey Trot, which takes place in December, so the idea of running 4 races in four consecutive months was born. I ran:

It wasn’t as hard as I’d expected to run races so close together. This was partly because of the way I managed my own expectations of myself. It was no longer about one big day after weeks of build-up and I did not expect to get a PB in each race. I was able to give myself time to recover after each race. The day after a half marathon I usually find my mental and physical energies are at a low ebb and I need a full week to recover. I didn’t worry too much about training between races. I ran regularly but I didn’t manage to do long runs in between races. This didn’t seem to adversely affect either my performance or my enjoyment of the races.

Once I’d got as far as four it just seemed like a good target to try and do twelve. I couldn’t quite manage to find races for twelve consecutive months because there are very few races in January. So I’ve changed my challenge to twelve half marathons in twelve months. In early January, with some trepidation, I consulted the list I’d made of half marathons in 2015 and booked the next five:

The Caythorpe Dash was great fun – a small, friendly race, mostly off-road with free food (including pudding!) at the end. If all goes to plan I will be half way through my challenge the day after publishing this post when I cross the finish line at Loughborough.

So why do runners set themselves slightly mad challenges? My love of running and racing comes from the fact that I am always competing against myself to reach my personal targets and the achievement is all mine. I’m still getting faster, although it’s getting a little bit harder now. It’s wonderful to be able to carry on setting PBs but when that stops I know I will find new challenges to set myself and new things to try.

My challenge is ambitious – I’m not entirely confident I’ll be able to complete it and I will be very lucky to be fit for all these races. But I believe it’s the hard things that are worth doing because they are the things that really stretch us and make us realise what we can do.

I’d love to hear about your running goals. What do you have planned this year?