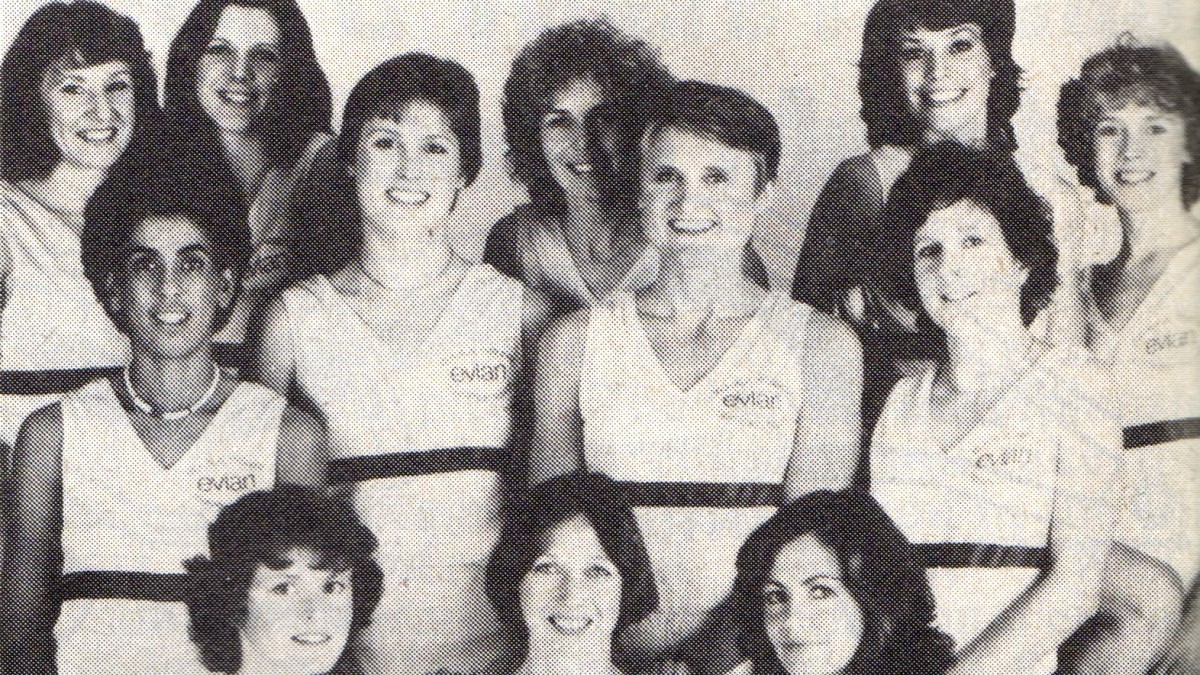 The 1970s were an important decade in the history of women’s marathon running in the UK and internationally. For most of the twentieth century, women were prohibited from running long distance races and it was only in the 1970s that countries began to lift the ban and permit women to compete in road races of all distances, including the marathon. In the UK, this change came about in October 1975. Margaret Lockley (born 1947) was one of the UK’s first top-class marathoners and became the first English national marathon champion in 1978.

MARGARET LOCKLEY who is a Liverpudlian, now working in the Luton Sports Centre, was the first British woman to finish in the 1978 Milton Keynes Marathon, having previously won the first W.A.A.A. Marathon Championship.

When at college she swam. She has been Cheshire cross country champion for five years, and three years ago ran 57 minutes 43 seconds in the Charles Kendal 10. She has been in the final of the 300O metres in the W.A.A.A. Track Championships at least three times.

Margaret has sent us some information about her training for last year’s Marathons.

For the last few years l have always trained twice a day during the week, and once on Saturdays and Sundays. When l decided to run in the 1978 Isle of Wight Marathon in May, I increased my training by about 20 miles a week for the eight weeks previous to the race.

I therefore ran approximately 90 miles a week on average. l had never run more than 15 miles before, so that running 20 miles in training was a new experience for me. I still find this a bit mind-bending.

I would find it very difficult to do a high mileage without a specific aim, i.e. a marathon looming up within a few weeks.

I have only run in two Marathons to date, and so I am still a little afraid of the distance, mainly about not being able to complete the course. At the time of writing, I have had a week off training with food poisoning, and so mentally if not physically, l don’t feel as well prepared for the New York Marathon in 10 days’ time as l should be.

Ideally, I would like to break the British record and get under 2 hours 50 minutes. I think I can do it, but whether it will happen this year or not, I don’t know.

I would like to see Women’s Road Races much better supported. We could do with more girls running 10 miles, 15 miles, etc., as well as the Marathon; and why not some races abroad for good road runners?

I would like to see a system here as big as the States (in proportion of course). A lot of people do take women marathon runners seriously, but many others regard us as a bit of a joke.

Women’s distance running was still in its early days in 1978 when this article was written. The Women’s Amateur Athletic Association (WAAA), the governing body for women’s athletics in England, had brought in experimental rules permitting women to run road races longer than 6000m (approximately 4 miles) in October 1975. The rule changes also permitted women to run in men’s races as long as certain conditions were met. These conditions included the race organisers applying to the WAAA for a separate licence for the women’s race, advertising the fact that there was a women’s race and recording a separate set of results. 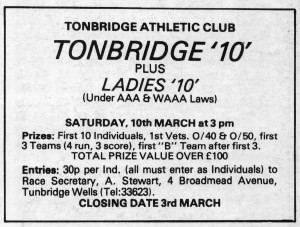 Most race organisers continued to put on men’s races and did not open their races to women. The Road Runners Club fixture list for 1979 lists 94 races, ranging in distance from 10 miles to the marathon, plus two ultramarathons. Only 34 of these 94 races were open to women. The Tonbridge 10 was one of the races which put on a “Ladies Race” in 1979. Note that this advertisement from Athletics Weekly makes it clear that the race will be run under WAAA rules.

Other top women marathoners shared Margaret Lockley’s views. Gillian Adams wrote in the same article that she was in favour of the expansion of women’s distance running in Britain. She thought that this might happen over time as more 10 mile races were including a women’s section. A profile of Leslie Watson, in the April 1979 newsletter, states, “She would like to see more marathons open to women…and also road races at lesser distances.”

The Road Runners Club Newsletter appeared three times a year . This article, which appeared in the January 1979 edition, must have been written prior to the 1978 New York City Marathon held on 22nd October. Margaret Lockley placed 6th at New York in 2:50:58, not quite meeting her target of sub-2:50. This was just four seconds slower than the British record Rosemary Cox had set at the Rugby Marathon on 3rd September that year.

It was Joyce Smith who became the first British woman to run sub-2:50 when she took more than nine minutes off Cox’s record at the WAAA Marathon Championships at the Sandbach Marathon on 17th June 1979.

Margaret Lockley did not set the British record, but she steadily improved her marathon times over the next five years, running sub-2:50 for the first time at the inaugural London Marathon on 29th March 1981, where she placed 10th with a time of 2:47:29.

In 1982, Lockley lowered her marathon time again to 2:45:21 and, as one of the top-ranked marathoners in the UK, was selected to join the Evian National Women’s Marathon Squad. This was a new initiative of the British Amateur Athletics Board and the WAAA designed to secure more funding and sponsorship for female marathoners. In 1982, Lockley was the winner of the second Great North Run half marathon.

The Road Runners Club was founded in 1952 to promote distance running for men in the UK. It had members across the country and played a significant role in the development of road racing up to the marathon distance, as well as road and track ultramarathons. It was not until 1976 that the Road Runners Club voted to permit women to join as full members. Prior to that, women had been allowed to join as “Lady Associate Members” recognising their role in supporting men’s running as race marshals etc.

Margaret Lockley is now in her seventies and lives on the Isle of Man where she is actively involved in athletics. After moving to the Isle of Man, she became involved in fell running both as a competitor and as a race organiser and official. Her club, Manx Fell Runners, recently recognised her contribution by making her a Life Member. Lockley coaches athletes and is involved in the organisation of road races on the island. Her son Ollie Lockley (born 1993) has been selected to represent the Isle of Man in the marathon at the 2022 Commonwealth Games in Birmingham.

If you are interested in knowing more about athletics on the Isle of Man, David Griffiths’ Manxathletics Facebook page gives thorough independent coverage of events on the island.

2022 marks the Centenary of the foundation of the Women’s Amateur Athletic Association. The WAAA was the governing body for women’s athletics in England until 1991 when it merged with the men’s AAA to form the AAA of England.

On 3rd August 1980, 200 women from 27 countries lined up in Battersea Park in London to run a marathon: the third Avon International Marathon. Maureen Fitzpatrick was one of those women, excitedly waiting at the start and hoping to complete her...

END_OF_DOCUMENT_TOKEN_TO_BE_REPLACED

In March I was fortunate to have the chance to meet Mara Yamauchi, the UK's second-fastest marathon runner, when she came to Nottingham to talk to England Athletics Run Leaders about coaching and training. Mara Yamauchi was inspired to run by...

END_OF_DOCUMENT_TOKEN_TO_BE_REPLACED 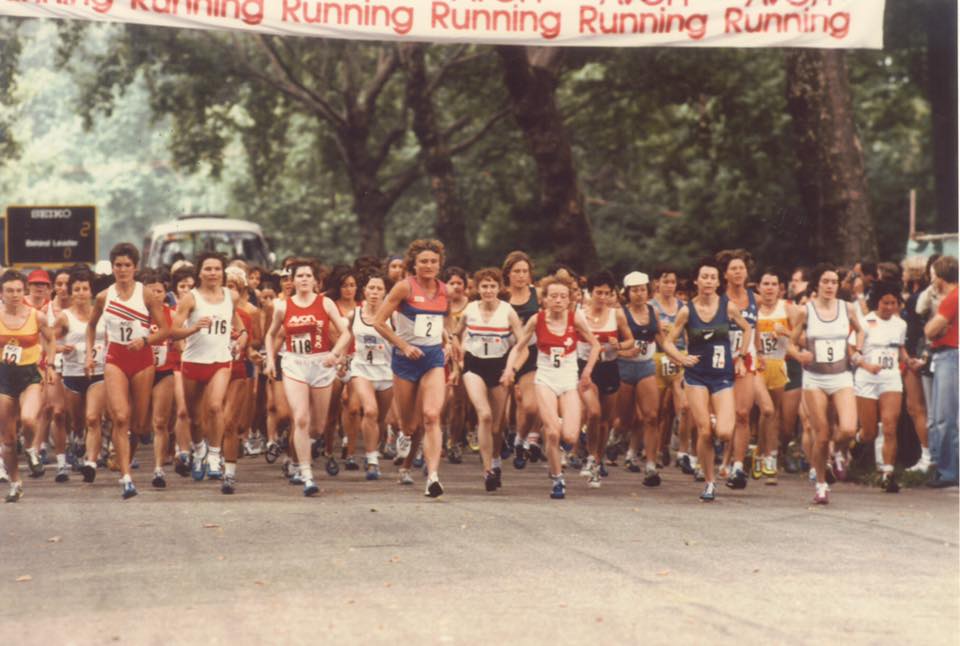