7 March 2017
Interviews with women runners over 50
books about running | Emmanuelle Tulle | Holme Pierrepont Running Club | London Marathon | marathon | parkrun | Robin Hood Marathon | runners over 70 | Woodthorpe Huffers & Puffers
Women over fifty are not often in the public eye, and we don’t know much about older women’s experience of participating in sport or their attitudes to exercise. Through interviewing women runners for my blog I want to share and give value to their stories. For the first four interviews I chose women of different ages (50s to 70s) who had different running biographies. I am interested to see if common themes emerge from these initial interviews. This article looks at pathways into long-distance running: how did they become runners? It is the first in a series of three. Subsequent posts will look at the motivations for starting running, and how these have changed; and the development of the runner’s identity. 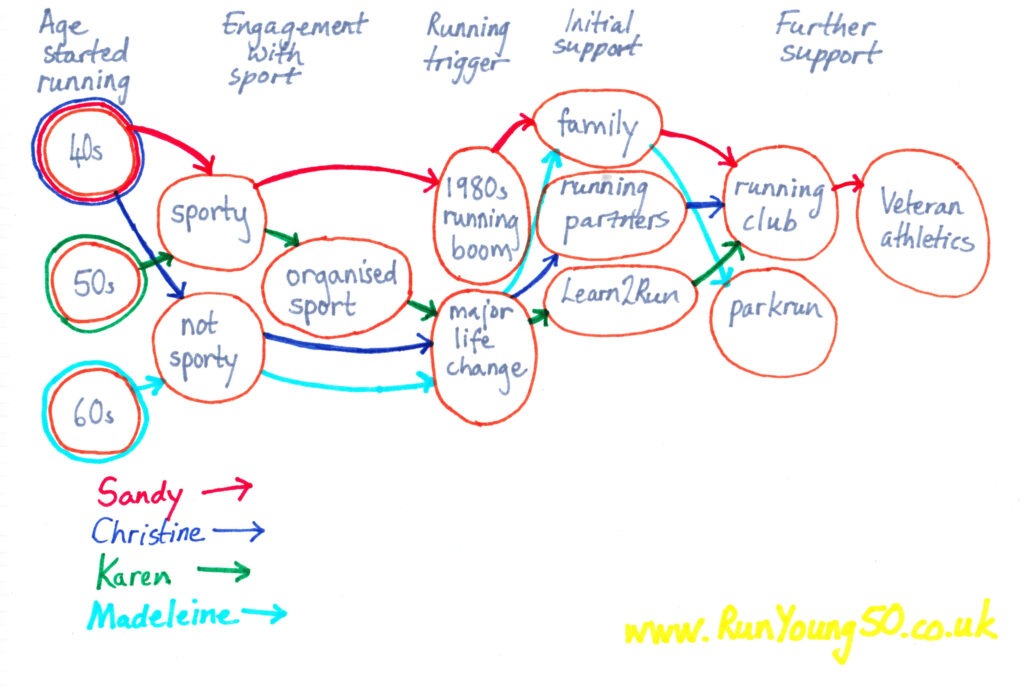 In February this year the parkrun organisation reported that over 50s had run 2 million miles at UK parkruns in 2015.  Their data show that parkrun is encouraging people over 50 to become more active, and it is helping people of all ages to start...

END_OF_DOCUMENT_TOKEN_TO_BE_REPLACED

Did your life change at 50? Karen Parkin started running shortly after her 50th birthday and says, “It’s the best thing I ever did.” The data from Sport England’s Active People Survey suggest that Karen is not alone in taking up running in her...

END_OF_DOCUMENT_TOKEN_TO_BE_REPLACED

As a runner in my fifties, who hopes to carry on running into old age, what can I learn from women who have continued to run through their fifties, and into their sixties and seventies? There are very few women over 64 running in the UK. According...