Learning to be a run leader

I love teaching and helping other people to achieve their goals. Some of my most rewarding experiences have been when I’ve helped someone to achieve something they didn’t think was possible. Recently I’ve been helping a friend learn to run and I’d like to pass on my enthusiasm for running to more people, especially older women who may feel that running is not for them.

It was with this in mind that I signed up to do the UK Athletics Leadership in Running Fitness course. The course is aimed at people who want to run groups for beginner runners, either independently or as part of a running club. Although not designed as a coaching course much of what is covered would also be useful for running training sessions at a running club.

It was a cloudy, grey day at the beginning of April when I set off to Saffron Lane athletics stadium in Leicester for the course. I had no idea before going on the course that Saffron Lane stadium had been a major athletics venue in the 60s and 70s with a cycle velodrome on the same site which hosted the World Track Cycling Championships in 1970 and 1982. The velodrome is now demolished but a board in the club house commemorates the famous names from athletics and cycling who raced at Saffron Lane and the records that were set there. 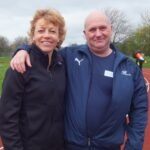 Our course leaders were Rachel Berney and Clive Holden, both brought a wealth of knowledge and experience to the course. I was wearing my Sleaford Half Marathon t-shirt and couldn’t understand why Clive was so keen to know my thoughts on the race until he told me that he was on the organising committee. Fortunately my feedback was positive! There was a brief introduction from Beverley Hooper who is the Run England Running Activator for Leicestershire and Rutland. (There’ll be more about Beverley and her role in a future post.)

The course covers all the topics you need to consider as a run leader including planning sessions and working with beginners and mixed ability groups. There was lots of group work and interaction which made it easy to engage with the content. For me the most enjoyable part of the course was the practical sessions when we went out onto the track to try our hand at leading warm-ups, post-run cool-down and stretching, and even delivering a whole “mini session”. It was a great opportunity to learn through doing and also through what you forgot to do! We got to watch each other’s sessions too which gave me lots of ideas and made me less nervous when it was our team’s turn. Not everyone in the group was a runner. It was interesting to see how that affected people’s confidence just as it might in a beginners running group. In the end even the “non-runners” were having a go at running which shows just how effective the sessions we planned were. 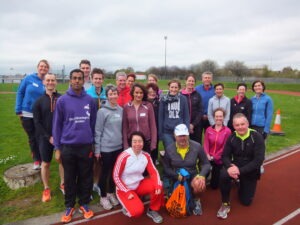 There were 21 people on the course with a variety of motivations for attending. Most were from established running clubs, many of which already run beginners courses once or twice a year. There was also a run leader from the West Midlands who delivers courses taking people from beginner to 10k; a PE teacher keen to engage teenage girls in sport more; and some women who were about to deliver a weight management fitness programme and wanted to include running in it.

Having attended the course I feel more confident about leading training sessions. One of the key messages for me was: “you are the expert in your runners”: as a run leader you are best placed to know the needs of the runners in your group and to deliver training that is tailored to them.

My running club kindly paid most of my course fee. I hope to use some of what I’ve learned by getting involved in training sessions at the club. My real passion is to help beginners learn to run and I will be thinking over the next few weeks about how I can make that happen.

Leadership in Running Fitness | Run England | run leader
← Previous: A running club where no-one gets left behind Next: A county that runs.... →