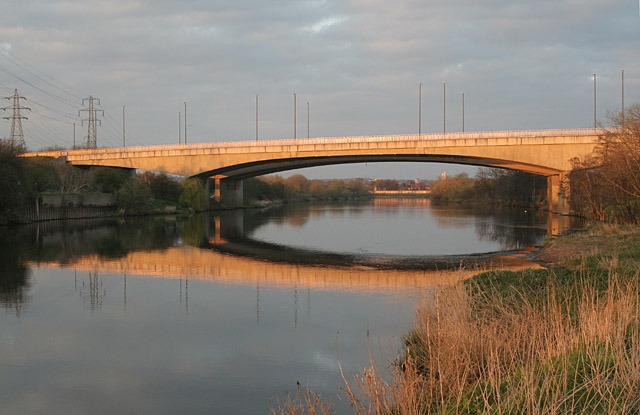 After thousands of miles, runs in the dark, runs on icy pavements, dozens of muddy, slippery cross country races, tens of thousands of kerbs and almost ten years of running, today was the day when I took a tumble.

Three miles into my run, I was on a riverside path which goes under Clifton Bridge, a six-lane two-span concrete bridge over the River Trent, which forms part of Nottingham’s ring road. The bridge has been undergoing major repairs for over a year following the discovery of structural problems. The last time I had run this route, I had stopped briefly under the bridge to shelter from the rain and have a drink. I’d looked at the signs of work underway – the fencing and equipment around the bridge pillar. This time the works had changed a lot. A much larger area was fenced in and there was some sort of scaffolding built up to the underside of the bridge. I looked at the scaffolding and that was when I tripped and fell.

The path had a large hole which I had failed to spot. In that moment of distraction, I must have caught my foot in it.

It’s a shock to find yourself suddenly floored. I landed on my left side and felt my left cheek on the ground. I jumped to my feet quickly and wondered if the workmen on the scaffolding had seen me fall over, but if they had they didn’t say anything. The path is quite hard with earth on the surface. I could see I had dry mud down my left-hand side. As I was feeling shaken, I decided it would be good to sit down. This would give me time to assess how injured I was. The rush of adrenaline immediately after a fall means things don’t always hurt straight away.

I walked under the bridge and found a high kerb to sit on, outside Sat Bains restaurant. I had planned to do ten miles and, as I am not in the habit of running that far and knew the weather might worsen, I had taken my small backpack with some food, a hydration drink and my running jacket and buff.

I had a drink, ate two rice cakes with peanut butter and decided I had better look at my face using my mobile phone. There was quite a bit of mud which I managed to clean off. I thought it might concern people I encountered on the way home.

Both my knees were grazed and my left knee was bleeding which I hadn’t realised at first. Fortunately, the bleeding stopped after a couple of minutes so I wasn’t going to have blood running down my leg.

I thought that I might have twisted my right ankle a bit, but it felt OK.

I decided that I would be OK to run but that I would not try and do the longer distance, as it was probably best to get home in case anything started feeling worse.

I took a different route back, crossing over Clifton Bridge and following the south side of the Trent. The only part of me that I noticed hurting was the little finger side of my left hand which must have taken some of my weight when I hit the ground. Nobody I met on the way back commented on my muddy appearance or grazed knees so I assumed it didn’t look too bad.

I’m sure you’ve seen enough pictures of other runners’ injuries and don’t need to see mine, so here’s a picture of my muddy clothes. If I’d been wearing leggings my knees probably wouldn’t have been grazed, but the fall might have ruined the leggings.

My last three miles were faster than the first three, because I was keen to get home. I enjoyed my run despite the fall, and I was pleased to have run six miles which is a bit longer than I usually run in pandemic times.

Several hours later, I’m still feeling the effects. My left hand is bruised and my left knee is stinging a bit. Fortunately, I wasn’t badly hurt but I feel slightly off kilter and feel I need to look after myself.

I think the worst thing about falling is going in an instant from feeling confident and relaxed to being vulnerable and potentially injured. It feels as if you have no control. I didn’t have time to realise what was happening and try to prevent it.

According to the NHS public health advice, falls are a common, but often overlooked, cause of injury. Around 1 in 3 adults over 65 who live at home will have at least one fall a year, and about half of these will have more frequent falls. It’s not hard to imagine how falling can lead people to lose confidence and feel they’ve lost their independence.

It’s less than eight years until I reach the 65 and over age category. But I think whatever age we are, we shouldn’t ignore the risks associated with falling. Actions that can help reduce the risk of falls include doing balance exercises, such as yoga and Pilates, and building muscle strength through weight training. It’s also important to do what we can to reduce our risks of developing osteoporosis (loss of bone density), particularly for women who have gone through the menopause. Having osteoporosis makes you much more likely to break bones if you fall.

This wasn’t my first fall whilst running. A few years ago, I fell whilst running in a park. There was a thin wire hoop lying in the long grass and I didn’t spot it. I must have caught both my feet in it. Fortunately, the ground was fairly soft, and I wasn’t hurt.

There have been plenty of near misses too. I’ve noticed that when I’m tired, especially after running many miles, I don’t tend to lift my feet as high and this can lead to me catching my foot on kerbs or bumps in the pavement. I try to remember to focus on lifting my feet when I know I’m tired.

I’m looking forward to marking ten years of running in February. This incident won’t put me off but will remind me to concentrate on the path ahead.

Have you had a fall when running? How did it affect you and how easy was it to recover afterwards?

The three photographs of places are all from the geograph.org.uk website, under Creative Commons licence cc-by-sa/2.0.