This post is about my experience of running in a milestone year.  Could I be faster at fifty? 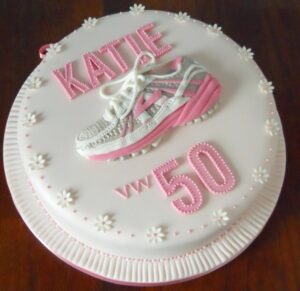 In May 2013 I reached a half century and my feelings about this were very much linked to running.  Running has given me the feeling that I can start something new; I can do something I never thought that I would do; I feel strong and I feel fit.  I chose to celebrate my new age category (Veteran 50) on my birthday cake.  I started the year confident that I could achieve my goal of being faster at fifty.  But in my milestone year I also had a reminder of how lucky I am to be able to run.  It is something I will never take for granted.

I took up running shortly before my 48th birthday and taught myself through a process of alternating walking and running, and counting breaths, until I got the hang of it.  My big goal was to run a five-mile relay leg in the 2011 Robin Hood Marathon for Home-Start Nottingham, a local charity where I volunteered as a trustee.  It was only after I’d been running for nearly a year that I realised I could run faster.  Starting to go to my local parkrun made a big contribution to this as running the same route repeatedly made me realise that I could push myself harder.  I noticed that other runners were breathing heavily whilst I was running “at the speed of chat”, so I started to push myself to run faster.  In the course of that first year at parkrun I improved my time by nearly 5 minutes.

I love setting myself challenges.  For my 51st year I decided on the target of running personal best times (PBs) at all seven distances I’d run up to that point: 1 mile (track), 5k (parkrun), 4 miles; 5 miles, 10k, 10 miles and half marathon.  It was ambitious but I felt confident it was achievable as I knew I was still getting faster.

It wasn’t quite as straightforward I had thought.

Not long after my 50th birthday I started to experience pain and inflammation in several joints and to feel stiff and uncomfortable in the mornings.  For nearly twenty years I’ve lived with the memory of the chronic pain and stiffness I experienced when I had rheumatoid arthritis in my late twenties and early thirties, as well as living with the damage it caused to my wrist joints.  Ever since that time I’ve appreciated all the things I can do which I struggled to do without pain when I was ill.  I felt so lucky to be able to run.  To have this reminder of some of the symptoms of rheumatoid arthritis was hard to deal with.

For four months I scaled back my running and felt less confident in what I could do.  My aim of setting PBs took a back seat and I gave up my place in the Robin Hood Half Marathon as I had not trained for it.

The outcome was a positive one.  My GP referred me to a rheumatologist but by the time of my appointment a few months later my symptoms had improved and I’d diagnosed my foot pain as metatarsalgia.  I was fairly certain I was not experiencing a recurrence of rheumatoid arthritis.  The consultant confirmed this and reassured me that the likelihood of a recurrence diminishes with the passing of time.

This episode was a reminder that we can’t be sure what the future holds.  As we grow older our health becomes ever more precious and it’s something we can’t take for granted however well we look after ourselves.  It reinforced my desire to make the most of this time I have now and to “run my heart out”.

Having fewer months to fit in the races meant that I did not manage to run all of the seven distances.  There are not many 10 mile races and I failed to enter early enough to get a place in the 10 miler which I had run the previous year and hugely enjoyed.  However over the course of the year I did manage to run the other distances and to set personal best times in all of them.  It was an amazing feeling to be running faster at fifty.  It made me feel as if I was getting younger rather than older!  I know I can’t keep getting faster for ever but whilst I can I am determined to make the most of it by entering races regularly.

Early in 2014 I realised I was getting quite close to joining the parkrun 50 club and decided to see if I could do whilst I was still fifty.  It was quite a squeeze but I just made it with my 50th run taking place the last Saturday before my birthday.  It was a great pleasure to be accompanied by my daughter on that run and she had also decorated the cake I’d made to celebrate.  My 50th run also coincided with me being awarded the “runner of the month” prize by Colwick parkrun – a new pair of shoes from Sweatshop.  It was an honour and a huge surprise and had me smiling for days.  What a fantastic way to finish my milestone year!

So what do I do now that I am the boring age of fifty-one?  I will set myself some new challenges and I’m still aiming to run faster…..!!

parkrun | Robin Hood Half Marathon
← Previous: A county that runs.... Next: “I was a little bit before my time” – pioneering marathon runner Joyce Smith →