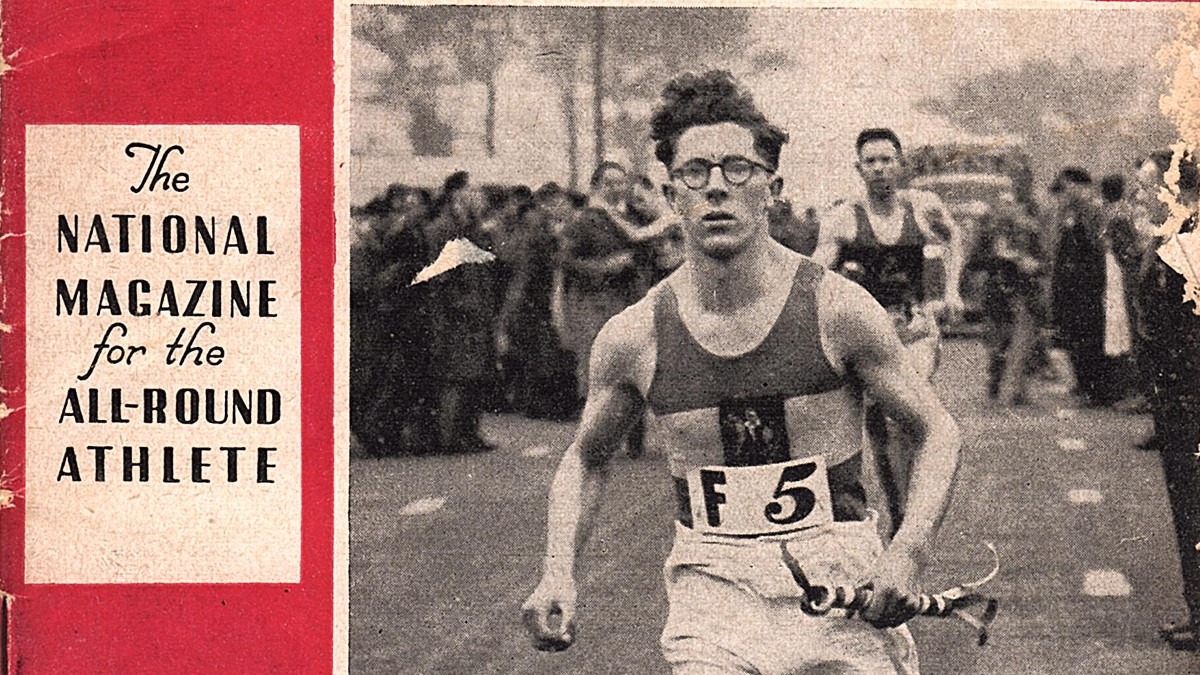 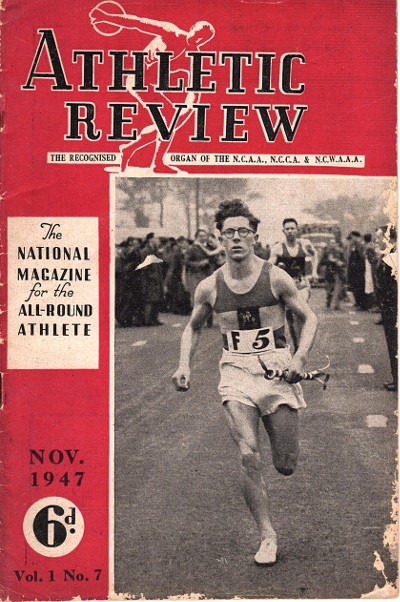 My oldest athletics magazine is this copy of Athletic Review, dated November 1947. I received three copies of this magazine, this one and two from March and May 1948, when I purchased several years of Athletics Weekly magazines from a gentleman who kindly included these in the parcel.

It feels quite special to hold a magazine of this age, published when my parents were still at school. The paper is brown with age and seems to have deteriorated a bit at the edges.

This copy of Athletic Review cost sixpence to buy. This was six old pence. Before decimalisation in 1971, there were 20 shillings in a pound and 12 pence in a shilling. Sixpence in 1947 was roughly equivalent to 90 pence today.

The magazine was long-lived and was still being published in 1977. I do not know when it closed.

Athletic Review was first published in May 1947. Although the war had ended when Japan surrendered on 2nd September 1945, some of the privations and austerity that people in Britain had lived with during the war continued during the post-war years. Rationing of many types of food, clothing, soap, coal, gas, electricity and petrol were all still in place in 1947. It was not until 1948 that the end of rationing began. Rationing lasted until 1954 when meat and bacon were finally no longer rationed. Bread had been rationed for the first time in 1946 due to shortages.2

The bombing of many cities meant that there was a shortage of housing with many families living in temporary homes.

Although many British Armed Forces personnel were released from service (“de-mobilised”) in 1945, the process continued until December 1946. Some continued to serve in Palestine and the Far East.3 In late 1947, some athletics club members might still have been in service or only just have returned from service.

All of this, along with the disruption of the war, meant that many athletics clubs were struggling. Some clubs had lost access to their premises during the war, for example, Sutton Harriers Athletics Club in St Helens, Lancashire lost their headquarters and ceased activities for the duration of the war. They might not have re-started afterwards, if it were not for East Sutton Labour Club offering the use of their accommodation as a temporary base.4 Most competition was discontinued as young men were conscripted into the Armed Forces. After the war, many clubs found it hard to recruit new members.

The Editorial on page one of the magazine refers to this post-war predicament. Its title is “Moving forward again.” The Editor refers to cross country clubs having fallen into a “rather apathetic condition”.

It was natural, of course, that after the war there should be some difficulty in getting things moving again, but this period seemed to many of us to be lasting altogether too long. Not only had the general standard of performance dropped considerably on pre-war days, but the numbers taking part in our sport also left much to be desired. True, many of the veteran runners were retaining their interest, and many of them were showing wonderful form. But for some reason the younger end were not being attracted to the field; and that is always a bad sign.

The Editor encouraged all those involved in the sport to make “efforts to bring in new blood”.

There are further references to the need for recovery. The report on the Manchester to Blackpool Relay Race describes the tremendous excitement of the supporters watching the race. The author comments:

“…one feels that it is just this type of competition which is needed at the present time if we are to recapture some of the prosperity of the pre-war days”.

This suggests that races have a part to play in reviving enthusiasm for athletics and that athletics can contribute to raising the national morale.

The “Round and About” news section contains reports from clubs. Benwell Harriers reported that their committee had decided to send a copy of Athletic Review to all members away from home and “letters of appreciation had been received from Forces’ members who find it difficult to keep in touch with athletics or to obtain sports magazines”.

Billingham Synthonia Athletic Club reported that it had a cross country section in operation for the first time since 1939 and had attracted a dozen new runners.

Bury AC were making progress in their effort to “bring the old club back to pre-war standard”.

Warrington AC had found a new lease of life after having been at risk of closing 12 months before. 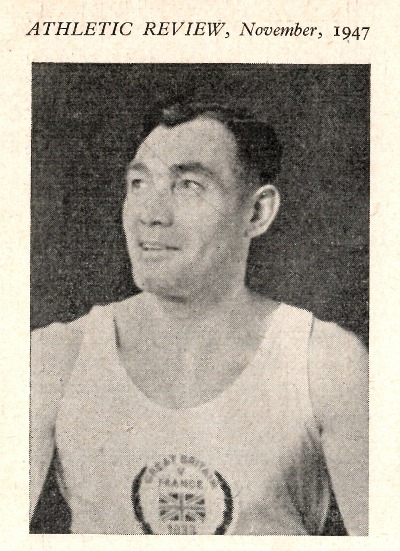 The disruption of athletes’ careers

Individual athletes’ amateur careers were disrupted. There is a profile of Jack Holden (1907-2004) of Tipton Harriers under the title “Stars – Past and Present”. There is a long gap in his notable performances. He won the International Cross Country Race and the English Cross Country Championship in 1939. There was a seven-year gap before he won the English Championship again in 1946. The article notes that he had made the most of opportunities to race during his wartime service in the RAF. Holden was able to return to athletics at a high level. He won the AAA Championship Marathon in 1947 and the article tipped him as a possible first British Olympic marathon champion.5

Whilst Holden made a successful return to athletics and had a long career, winning marathons in his forties, other athletes had missed out on what would have been their peak years. Some may not have wanted to, or been able to, return to athletics.

The coverage of women’s athletics is scant and amounts to one page. It consists of a report from the Northern Counties WAAA with the names of the President, Mrs. P. R. Pope and the Honorary Secretary, Mrs. R. Taylor. The fact that both positions were held by women is notable because it was not uncommon for them to be held by men in women’s governing bodies and women’s clubs.

The report notes an improvement in the number of clubs affiliated to the NCWAAA. It had risen from 12 the previous year to 30. This was still considerably down on the pre-war period when 40 clubs had been affiliated. There had been fewer competitions than hoped for and very little interest shown in field events. The writer urges clubs to “rouse interest in this form of competition”.

There is a list of road walking and cross country events taking place from January to March. The programme of women’s track and field events in the forthcoming 1948 London Olympics is given. The events available to women were:

Women were prohibited from running further than 200 metres at the Olympics from 1928 until 1960 when the 800 metres was added. It took another 12 years before the 1500 metres featured in the programme and the women’s marathon was not added until 1984, 88 years after the first men’s Olympic marathon. (For more on women’s distance events in the Olympics programme read my article on Jacqueline Hansen).

There is barely any mention of female athletes elsewhere in the publication. Liverpool Pembroke Athletic and Cycling Club reports that their Ladies’ section has open dates left on its cross country fixtures list and interested clubs should get in touch to arrange a match. Women’s events are included in the Midland Counties fixtures listing on the back page.

Women’s athletics was gaining more recognition at this time. 1947 marked a major step forward for the WAAA when it was admitted as a member of the British Amateur Athletics Board, which was recognised by the IAAF as the governing body for UK athletics.6

Whilst women’s athletics received some coverage, it was clearly held to be of much less interest than men’s competition.

Road racing was one discipline where women had very limited opportunities to compete. Men and women were not permitted to compete against each other. And women were not permitted to run long distances. Road racing was almost entirely a male sport. (See my article on road running in the 1950s.) The magazine features a two-page article about the Manchester to Blackpool Relay Race and the front cover has a photograph from the race. Road relays were very popular during this period, but this was a race that women never had the chance to compete in.7 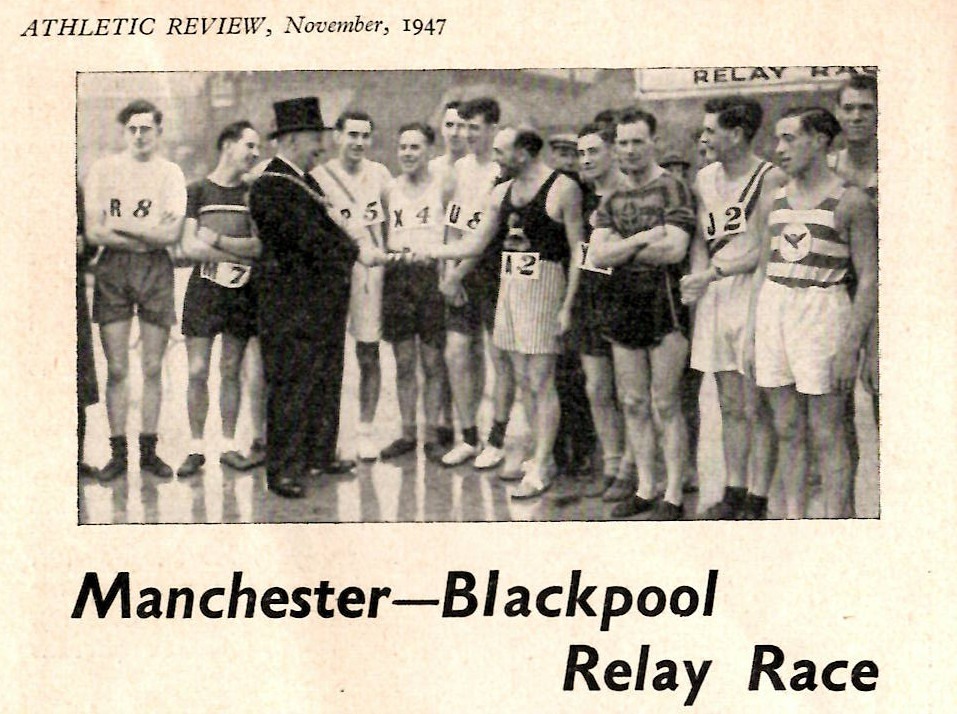 This edition of Athletic Review was published a year before the “Windrush generation” of Commonwealth citizens, many from the West Indies, began to arrive in Britain.8

The article on the British candidates for the men’s team at the 1948 Olympics states that Bailey and Wint would probably be invited to represent Great Britain if they weren’t nominated by their own countries.

For the “all round athlete”

This edition of Athletic Review includes an article on swimming and articles on swimming and cycling are included in the May 1948 edition. The November 1947 edition proclaims on the front cover that is its “The National Magazine for the All-round Athlete”.

It was not uncommon for athletics clubs to include cycling. Athletics events often featured both running and bicycle races.

Insights into athletics history and its social context

Back copies of most athletics magazines are not available to view online. Digitising magazines and making them searchable involves a lot of work. Copies of Athletic Review may be held in an archive, perhaps in the private papers of an athlete or athletics administrator. Of course, I would not have even known Athletic Review existed had I not been sent three copies.

Online archives are hugely useful as it’s just not possible to acquire and store physical copies of everything I might want to read. However, there is something special about owning these magazines with their fragile, yellowing pages. It makes me feel connected to the people who bought and read the magazine more than 70 years ago.

They give us insights into the history of the sport but also the social context in which it was played. in 1947, Britain was looking forward to the 1948 London Olympics whilst struggling to recover from the huge economic and social costs of the war. Athletic Review makes plain the challenges facing athletics whilst expressing great hopes for the future.

1. Dates of the formation of the area cross country associations are given on http://www.national.crosscountrychampionship.uk/

3. “The challenge of getting home after WWII“, Royal British Legion

5. Tipton Harriers website features an interview with Jack Holden from 2000.

7. The Manchester to Blackpool Relay Race was sponsored by the News of the World newspaper. The route was divided into 11 stages totalling 54 miles 288 yards. The race was first held in 1932 and continued until 1966. It was not until late 1975 that the WAAA agreed changes to the rules governing women’s participation in road racing which allowed women to compete in the same races as men and over longer distances than had previously been allowed.

8. The British Nationality Act 1948 allowed people from Jamaica and Barbados, and others living in Commonwealth countries, full rights of entry and settlement, to help rebuild the British economy after the Second World War. That year also marked the arrival of the ship Empire Windrush with 802 Caribbean citizens onboard. “How did Empire Windrush change London Docklands?“, Museum of London website.

9. More on McDonald Bailey who represented Great Britain at the 1948 Olympics: Obituary, The Guardian, 8th December 2013

10. More on Leslie Laing who was part of the winning 4x400m relay team at the 1952 Helsinki Olympics: Obituary, Jamaica Observer, 14th February 2021 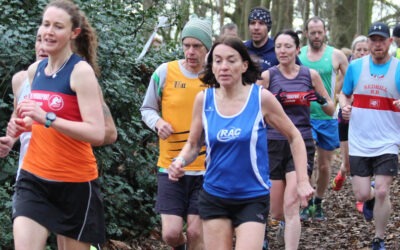 2022 marks the 40th anniversary of the founding of my running club, Holme Pierrepont Running Club. In the course of my research into women’s running history in the UK, I’ve visited many athletics clubs’ and running clubs’ websites (see my blog post...