I was not a complete track novice when I entered the event. My third ever race was a track 5k in 2011 (the Richard Belton 5k organised by Notts AC). I’m not sure that I knew it was a track race when I entered it. When I turned up at the athletics stadium, I was dismayed to realise that there was a stand with seats and that people would be watching me as I ran 12 laps. I returned to the event in 2012 and 2013 to run the Tim Wealthall Mile race. I quite liked running the mile, but didn’t see myself entering any other track events.

My club, Holme Pierrepont Running Club, is primarily a road running club, but it has encouraged participation in track races by organising its own Track Championships. These are free, open to all members, and with official timekeepers and race marshals. The Championships provide the ideal opportunity to try something new, and I don’t think I would ever have considered attempting to run other track distances if it were not for this event.

I arrived at this year’s Track Championships intending to run only the mile race, but enjoyed myself so much I ended up running the 200m and 3,000m as well. I went home full of enthusiasm for track racing, and wanting to run some more.

It was the list of entrants for the 1500m that discouraged me. I looked at it a few days before the event. It showed entrants’ names, club, age category and personal best (PB) time. I realised that the vast majority of the entrants were children; that no other adult women had entered this race; and that the handful of adult male competitors were all younger than me. I suddenly felt that I was too old for this event, and uncomfortable about competing, certain that I would be last in my race by a long way.

It was clear from the PB times given on the list that I would probably be slower than all the other entrants, most of whom were in the Under 13, Under 15 and Under 17 age categories.

Would it be faintly ridiculous for me to race? In a road race, there are many runners and I’m never last. I often finish in the top half of the field. On the track, you are competing against a small field of runners. It’s very obvious to anyone watching how far out of your depth you are.

Feeling rather unsure, I contacted Kathryn, a friend from my club, who I knew had participated in a previous Open. She reassured me that I would be fine and told me about her experience of competing in a race with children and one other adult.

I also thought about the example set by Sandy Poole. When I interviewed Sandy in 2016 she talked about the difficulties of competing against young girls in the 3000m. I thought that if Sandy had the courage to do this in her sixties and seventies, then so should I.

Once I had made my decision I stopped feeling nervous. On the 9th, I arrived at the Paula Radcliffe Athletics track at Loughborough University in splendid sunshine, and consoled myself with the thought that the whole race would be over in less than 10 minutes. I bumped into Ros, my physiotherapist, and John, another Holme Pierrepont member, who was officiating. It was good to have a few words of encouragement from them. 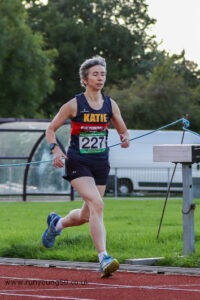 There were four 1500m races, starting with the slowest, and getting progressively faster, based on entrants’ PB times. I was the only adult in the first race, making me at least 34 years older than the next oldest competitor.

I lined up with 12 other runners. The gun was fired, and they all ran away from me. For the first half lap, I thought I might keep up with the last girl, but I couldn’t manage it. I had to remind myself that I was running this race for myself. And that it didn’t matter that I wasn’t racing anyone else. Hearing children’s voices shouting “keep going” was encouraging. The winner was an Under 13 boy who ran a PB time of 5.08.27. I finished last by over half a lap, and was glad it was over.

When I found out my time a couple of days later I was fairly pleased, as I am working towards faster mile and 5k times. It’s over 2 years since I ran a personal best time at any distance, so confirmation that I’m improving my speed is welcome.

When I checked the results from the Charnwood AC Open I found that I was the oldest female competitor across all the track and field events that evening.

My perception of this type of open event is that their main focus is to develop young athletes by giving them a chance to complete. Athletics clubs provide a structure for training and competition at all levels of ability for juniors, with the best performers selected to compete at regional, national and international events.

Senior (18 and over) and veteran (35 and over) athletes can enter open events too, but I assume that the ones who do are mostly athletes who can achieve performances better than or similar to those of the junior competitors.

Runners who’ve had no experience of athletics clubs are unlikely to attend these events because they don’t know about them. Also, they may be unsure if they are eligible to compete. I suspect that for most runners who have taken up running as adults, track and field is not on their radar. The final Active People Survey published by Sport England in December 2016, reported that in 2015/16 424,900 women in my age category of 45 to 54, participated in running at least once a week, but only 9,900 took part in track and field.

There are other opportunities for veteran runners to participate in athletics. They can become part of the master athletics movement. Regional and national masters athletics organisations, such as the British Masters Athletics Federation, offer veteran athletes opportunities to compete against others in five-year age categories. Events span track and field, road races and cross country. This is an international movement which began in the late 1960s in Europe. The 20th European Masters Athletics Championships have just taken place in Aarhus, Denmark, with more than 3,800 competitors.

As the oldest woman at the Charnwood AC Open was I setting an example for others to follow? Or did my slow time make me a bit of an inconvenience to the organisers?

I do want to try doing more track events. I could join a masters athletics club, such as Midland Masters AC. This would qualify me to attend masters events, but these events would usually involve travelling, as they are unlikely to be on my doorstep.

I am looking forward to running the Tim Wealthall Mile again on 25th August. Then on 6th September I am lucky to have the opportunity to run a mile on the track for the third time this year, as the Nottinghamshire Athletics Network is putting on track mile and 5k races specifically aimed at road runners.

Thank you to Charnwood AC for giving me the chance to experience an open event as a competitor. There were so many volunteers involved in organising and officiating, all contributing to making it a well-run event. As the IAAF World Championships were taking place at the time, I reflected on how the British athletes I had been watching on TV must have all gained competition experience as children at events like this.

All photographs courtesy of athletic.photography. Visit their Facebook page to see more photos.