** Guest post ** Christine Oldfield writes about her experience of competing against world class masters athlete, Angela Copson, at the British Masters Athletics Federation 10km Championships in 2019. My friend and fellow Holme Pierrepont Running Club member Christine originally wrote this article for our club magazine, “Running Free”. I asked her if I could publish it on this blog and she agreed. When I asked Christine for a few words about her running career, she wrote a great article which I published here. I then completely forgot about this article. I am publishing it now in memory of Christine, who died suddenly in December 2020. She is very much missed by friends from the running community here in the UK and in Australia, where she and her husband John were active in masters athletics. Christine gave a great deal to athletics as a volunteer, organiser and a track and field official in both countries.

It’s unusual for club runners to have an opportunity to run against the elite – and it’s even more unusual to find your name on the medal list just behind theirs. But on Sunday 7th April 2019, at the British Masters 10km Championships in Blyth, Northumberland, I found myself in this position.

Back in 2009, when I was W60 and fresh from Australia where lots of folk of all ages give Masters Athletics a go, I had entered the 1500m and 5000m at the British Masters Track & Field Championships, held at Alexander Stadium, Birmingham. But I soon discovered that, in Britain, in those days, only the really good runners in the older age groups competed in such competitions. I found myself totally outclassed and an embarrassingly long way behind the runner in front of me. The first in each race was Angela Copson. She broke the W60 British Record for the 1500m and World Record for the 5000m. In her own words that was when she was “just getting into running”!

The next time I came across her was at the same event in 2012, at Moorways Stadium in Derby. On that occasion I was officiating and, as track referee, I was privileged to sign her claim form for the W65 5000m World Record. 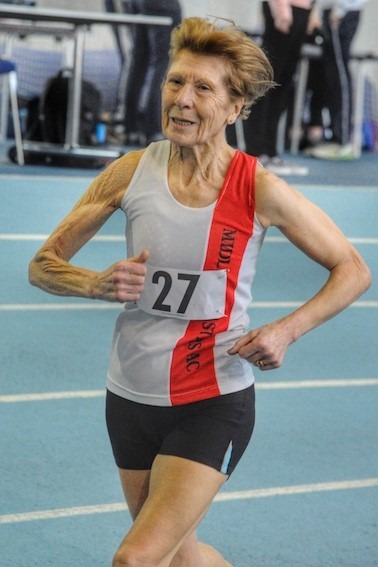 Angela came very late to athletics and was surprised to find how fast she actually was. Her achievements continued and in 2016 she became the oldest woman in history to break 3:30 for the marathon, recording a time of 3:24:54 in Manchester, just short of 69 years old. In 2017 she was awarded a British Empire Medal (BEM) in the New Year’s Honours List for her services to running. She has broken 48 British, European and World records or bests in the W60 and W65 age groups and, as a W70 at the World Masters Championships in Malaga in 2018, she won seven gold medals and a bronze.

She currently holds World Masters W70 records in the 3000m, 5000m and 10000m. And for 2018 she was named as the “European Female Master of the year for long distance”. In addition, World Masters Athletics announced in February this year that the “WMA Best Female Masters Athlete Award for 2018 for Long Distance was won by Angela Copson (Great Britain).” In both cases, the award was over all age groups.

The day dawned dull and drizzly and stayed that way for the duration of the race. But the easterly wind had eased and conditions for running were near perfect. I talked to Angela before the start and found out that the other BMAF W70 entrant would not be running – they had both been in Poland for the World Masters Indoors and Anne Dockery was suffering and not at her best.

The course was advertised as flat and fast but the first half was a surfaced path through the dunes – I definitely called it undulating – and the turn took us across fairly long grass and up a steep bank to the road where marshals assured me “from here on it’s all downhill”. I like downhill and found myself passing a good number of the non-BMAF runners and hearing the groans from behind as they saw the BMAF age group label pinned to my back. I passed an M65 and then the first of the three M80s passed me. He surged ahead and that galvanised me into action. We had a leapfrog battle to the finish and I just pipped him on the line, both recording the same gun time. I had said I’d be content if I finished in under 1:10 – so I was more than pleased with my chip time of 1:02:20 – my best for some years. I put it down to the enormous plate of fish ’n’ chips I had eaten the night before!

Probably because she does not seek the limelight, Angela Copson has not really received the recognition she deserves from the general running community. And she’s a Midlands lass, so any older woman who needs inspiration needs to look no further. She certainly spurred me on! 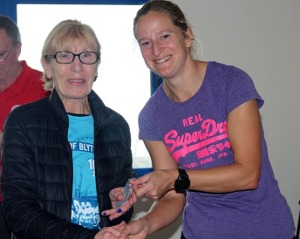 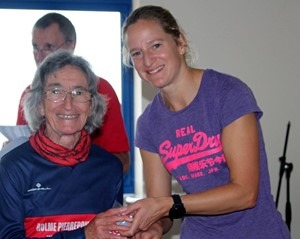 Angela Copson being presented with her Masters gold medal by Jo Zakrzewski.

Photo of masters athletes at the Nottinghamshire AAA County Championships, May 2018, with Christine on the far left. Courtesy of John Oldfield.

A tribute to Christine from her “home” parkrun, Rushcliffe parkrun, where she ran more than 200 times.

Interested in runners over 70? Read my interview with Sandy Poole and guest articles by ultrarunner Ais North and 100 Marathon Club member and race organiser Pam Storey.