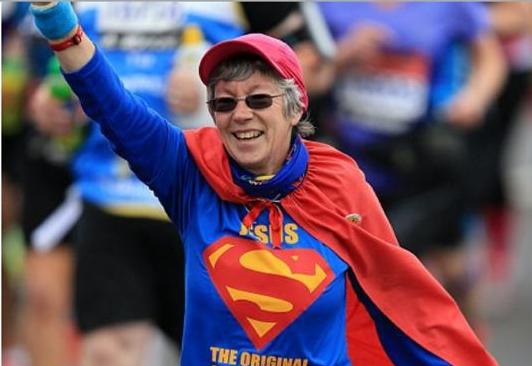 ** Guest post ** Pam Storey writes about almost 40 years of running and how she progressed from fun runs to marathons and ultra marathons. An enthusiastic member of the 100 Marathon Club, Pam has completed over 200 races of marathon or ultra distance and has every intention of continuing in her seventies. I became aware of Pam after joining the Road Runners Club and signing up for one of the Crawley track races which she organises. I am now preparing with excitement and some trepidation for my first track ultra in July. I am very pleased that Pam agreed to share her story here and I am looking forward to meeting her in a few months’ time.

Having never done any sport in my younger days, I decided to start running in 1983 when I was in my thirties, primarily to keep fit. After running a few ‘fun runs’, 10 mile races and half marathons, I decided I would see if I could run a full marathon (26.2 miles) so in December 1986 I ran my first marathon, St Albans Marathon. I finished in a relatively slow time of 4 hours 23 mins 25 secs but I was very pleased with myself!

After my first marathon I got mixed up with a group of people known as the 100 Marathon Club and continued to run more races of marathon distance all around the U.K. and some abroad. More about how I joined the Club later.

By May 1999 I had run 23 marathons and thought I would see if I could run further. There were not many ‘short’ road ultras in those days, so I opted for the Dartmoor Discovery (34 miles) on 5th June 1999. A very hilly event but I completed it, aged 51. In August that year I ran the Two Bridges 35 miler in Scotland and the rest is history! That was the start of my love affair with ultra distance. Running further than marathon distance is a great challenge and you meet a whole lot of different people from the ‘normal’ Marathon runners.

The following year, I ran the 55 miles London to Brighton race and, in 2003, my very favourite of all the events I have run, the Comrades Marathon in South Africa which is actually 55+ miles.

Around this time I became involved with the charity Advance International Ministries who are supporting a community in Kiyindi, Uganda. I became a Trustee and the Fundraiser and have helped raise thousands of pounds which have helped towards the building of a church, Pastor’s house, medical centre with maternity facilities and, most importantly, a day and boarding school for 500+ orphans and needy children. 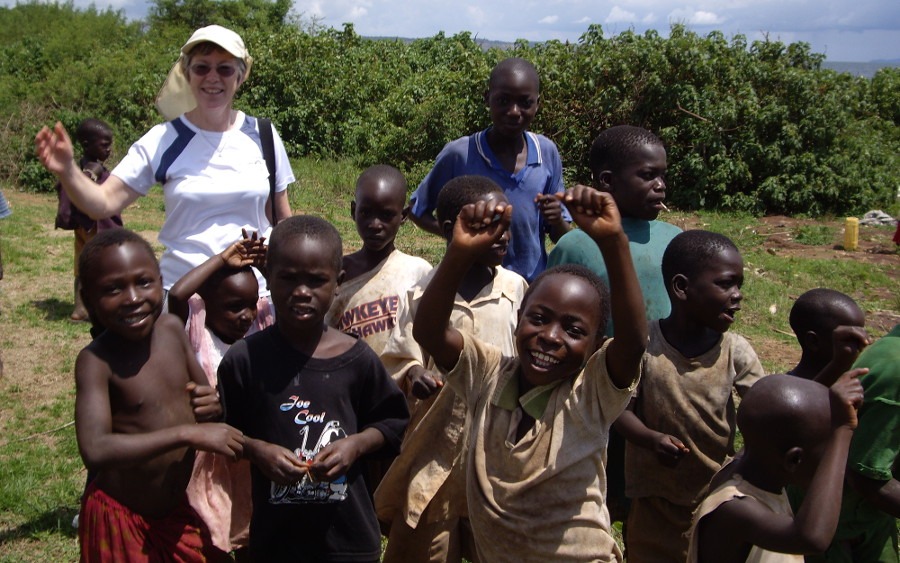 On one of my visits to Kiyindi in Uganda

After I had been running regular marathons and ultras around the U.K. and Europe, with distances up to 90+ miles, I completed my 100th Marathon in Dublin in 2006, running with my good friend “Superman”, AKA John Wallace. Plenty of Guinness was drunk afterwards to celebrate!

John and I have run 11 London Marathons together raising money for A.I.M. by carrying buckets!

In 2009, I walked 100 miles in the Long Distance Walkers Association annual event, my only 100 miles to date. That was a very memorable year as I visited Kiyindi for the first time and was baptised in Lake Victoria.  I have visited seven times in total enjoying every moment of the experiences.

Another marathon milestone at 70

A really special event happened in June 2018, just a few days after my 70th birthday. I love WW2 British aircraft, particularly the Lancaster Bomber. The 16th/17th May was the 75th anniversary of Operation Chastise, the Dambusters Raid. Seemed like a good time to run a special marathon!

On Sunday 3rd June 2018, I ran my 200th Marathon in the Dambusters Challenge at Reculver on the Kent coast (where Barnes Wallis tested the bouncing bombs).

The race actually started at Minnis Bay and the route was two laps of 3.82 miles going east towards Margate and two laps of 9.28 miles going west towards Reculver. Most of the route followed the sea wall apart from the turnaround at Reculver which was up a grassy hill.

It was a very warm sunny day and I had not run for a month as I had a slight muscle tear in my right calf which, thank God, was healed in time for the race. However, my lack of fitness showed and I jog/walked in 6 hours 38 minutes and 6 seconds. Job done….

That was not the end of it though as I managed another two marathons that year. I also completed my 10th eight day race in Monaco, one of my favourite events where each year I walk a marathon every day, raising money for Children and Future charity.

2019 was a fairly good year as I completed two marathons, two 24 hour track races, one being the Crawley race for which I am Race Director, and one in Barcelona, a city I have wanted to visit for many years, and a 50K in Perth.

2020 was a pretty disastrous year for runners who are used to racing regularly so my personal challenge of 220 marathons/ultra marathons by the end of 2020 went out of the window although I did manage three marathons and two ultras including the 24 hour track race in Gloucester at the end of October. 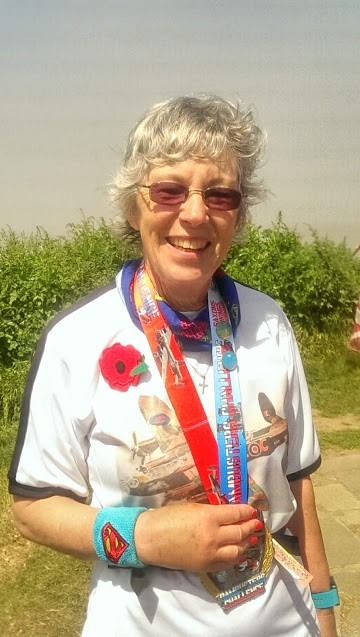 In total I have run/walked 24 hour races 16 times on a 400m track plus one 48 hours so as you might guess that is by far my favourite event. I prefer ‘time over distance’ events as there is no pressure to complete a certain distance within the time limits. I love the camaraderie of 24 hour races and, in the early days, it was mainly the same folk at races as there were only two in the U.K. There are now three and, hopefully soon a 48 hour race.

I have now completed 215 marathons/ultra marathons and, I have no intention of giving up any time soon.

As a slower runner, I have found something that is most enjoyable to take part in and have met some wonderful people during my 66 ultras. The highlight of my ultra life was when, in 2013, I organised a 6 day track event of 24 hours, 48 hours and 6 day races with 14 nationalities taking part.

Covid-19 restrictions permitting, I hope to complete 6 marathons/ultras this year to bring my total to 221 at the end of 2021. Then God knows what I will do after that!

The 100 Marathon Club is a UK-based running club registered with England Athletics. To become a Full Member, you have to have run 100 races of marathon distance or longer, ten of which must have been in the UK or Ireland.

The Two Bridges Road Race, which Pam ran in 1999 (and again in 2000 and 2003), was Scotland’s most famous ultra distance marathon, run as a road race from 1968 to 2003. It crossed the Firth of Forth twice using the Kincardine Bridge and the Forth Road Bridge. There’s lots of information about the race on the Scottish Distance Running History website.

The 6 Day race in 2013 was the British Ultra Fest which Pam organised with Abichal Sherrington and Alan Young.

The Crawley A.I.M Charity Track Races are taking place on 3rd/4th July this year. All three races, 6 hours, 12 hours and 24 hours, are full but there are waiting lists. The 2022 races will be held on 9th/10th April and entries will be open in May. 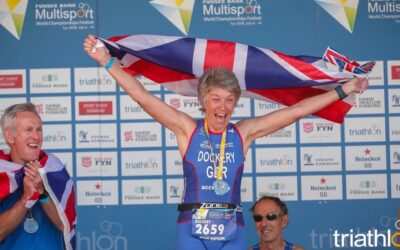