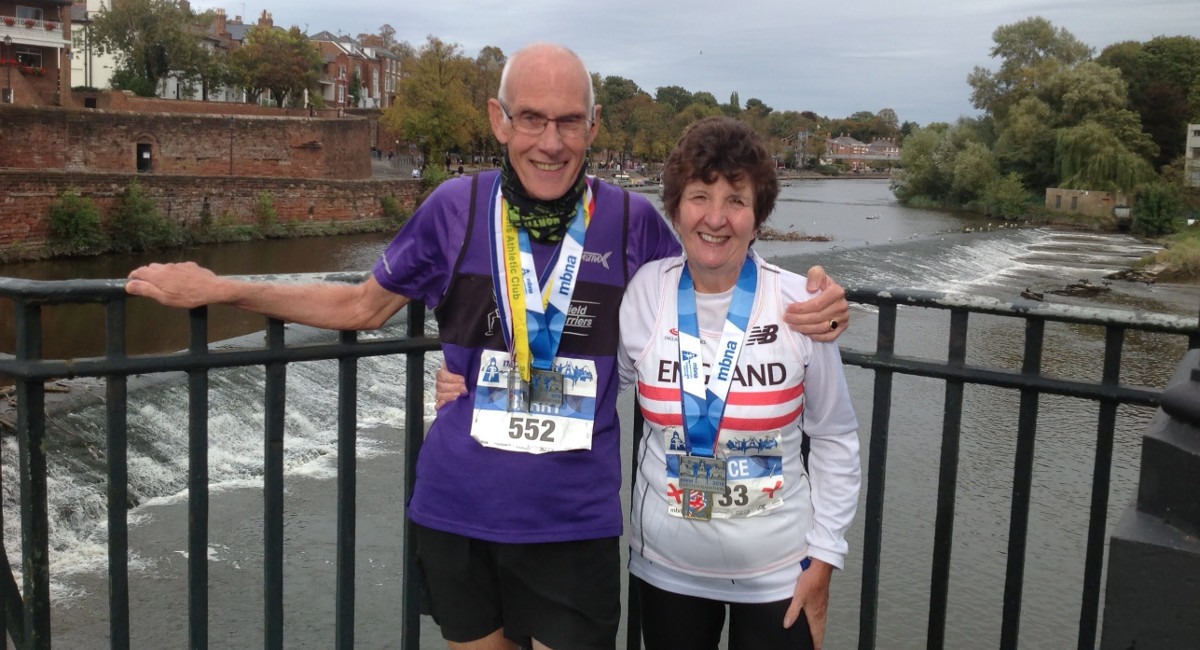 ** Guest post ** – Joyce Bell from Kent writes about how she finally became a runner in her early sixties. Within a few years of her first parkrun, she ran a marathon and surprised herself by qualifying to represent England as a Masters athlete. I met Joyce at an online get-together of her running club, Istead & Ifield Harriers, when they invited me to talk about the history of women’s running on International Women’s Day. Joyce spoke enthusiastically about how running has benefitted her. I was very pleased when she agreed to write this post about her running career.

I ran for many years before I finally felt that I could call myself ‘a runner’.

Of course I have heard it said that if you run, you are a runner, but that isn’t the way it felt to me.  With a husband and two children involved in running, it was natural that I would give it a go myself, and over the years I must have done a fair few miles. But I didn’t really enjoy it, I didn’t think I was any good at it and I didn’t really improve. Looking back, this was all because of my mental approach. Basically I didn’t think I was good enough to call myself ‘a runner’.

That all changed in May 2013, when, just shy of my 61st birthday, I accidentally came upon parkrun on one of my weekly plods. I decided to give it a go and, like all the best love affairs, ‘it just started quietly and grew’. By the end of 2013 it would have been unthinkable for me to do anything else on a Saturday morning. parkrun taught me that, although not the fastest, I certainly wasn’t the slowest. And, even if I were, it would not have mattered. Because I was already doing some running, my times did not fall as dramatically as some people’s – starting at 31:29 in May 2013 and breaking the magic 30 minute barrier in January 2014. More importantly I started really looking forward to my Saturday runs and was motivated to get out during the week and increase my distances.

One of my parkrun buddies and I dared each other to enter a 10k and in May 2014 I ran the Folkestone 10k. I was delighted to break the hour (59:09) and, to my astonishment, won the age group prize! From there I took on all the distances – 5 miles, 10 miles, Half-marathon, even cross-country events. If you’d have told me that five years earlier, I wouldn’t have believed you!

Well, of course there was one distance I hadn’t taken on – the marathon.  I was fond of saying that I was thinking of doing a marathon so that when the time finally came to hang up my running shoes, I’d have ticked off every distance, but I’m not sure if deep down I had any intention of doing it. Then a friend’s husband said to me – “you will regret it if you don’t give it a go” so I decided it was time to take the plunge. I entered the 2017 Chester Marathon – far away enough for nobody to know me – and I told only a few close friends and family. If I was going to fall on my backside, I didn’t want too many people to know about it!

Of course, I didn’t fall on my backside. I completed it in 5:06:09 and I cannot describe the sense of achievement. For a couple of weeks, my first thought every morning was – I’ve run a marathon!

So there it was ticked off my bucket list; I’d got the medal, T-shirt and photo to show the grandkids. But it wasn’t an experience I planned on repeating.

Then a few days later I got an email: “Congratulations – you have been selected to run for England in the Celtic Challenge at the 2018 Chester Marathon”. I don’t kid myself that this was because I am such a talented athlete – it was just a matter of numbers. The first five in each age group in a number of qualifying events were invited – and I snuck in at 5th place. Despite a bit of an ‘imposter syndrome’ moment I decided the chance to pull on an England vest was too good to miss.

I trained really hard for this one and did a PB of 4:49:03 which also gave me a Good for Age for London 2020. The England experience was great and although I was way slower than most of the other Masters runners, everyone was really supportive and I enjoyed it much more than my first marathon.

My ‘one and only’ marathon has turned into four and counting. My husband Barry and I both qualified for the England Masters team for the 2019 Yorkshire Marathon and then I decided to take up my Good for Age for London 2020. That of course did not happen, and my place has been deferred to 2023. Because I was fundraising, I decided to do the Virtual Marathon in October, where I had amazing support from other members of my running club – I had around 20 people running different sections with me and had a brilliant experience.

Because Barry was a long-serving member of Istead & Ifield Harriers, I joined the club in 2014. Had he not been, it is possible that I would not have joined a club, but I would urge anybody taking up running to join a club. Their support and advice are invaluable and I have made some really good friends. There is nothing better than turning up at an event where we have a big presence and feeling part of ‘the team’. I might have expected some of the faster runners to dismiss me, but I have honestly never felt that and am always impressed by the support I get. 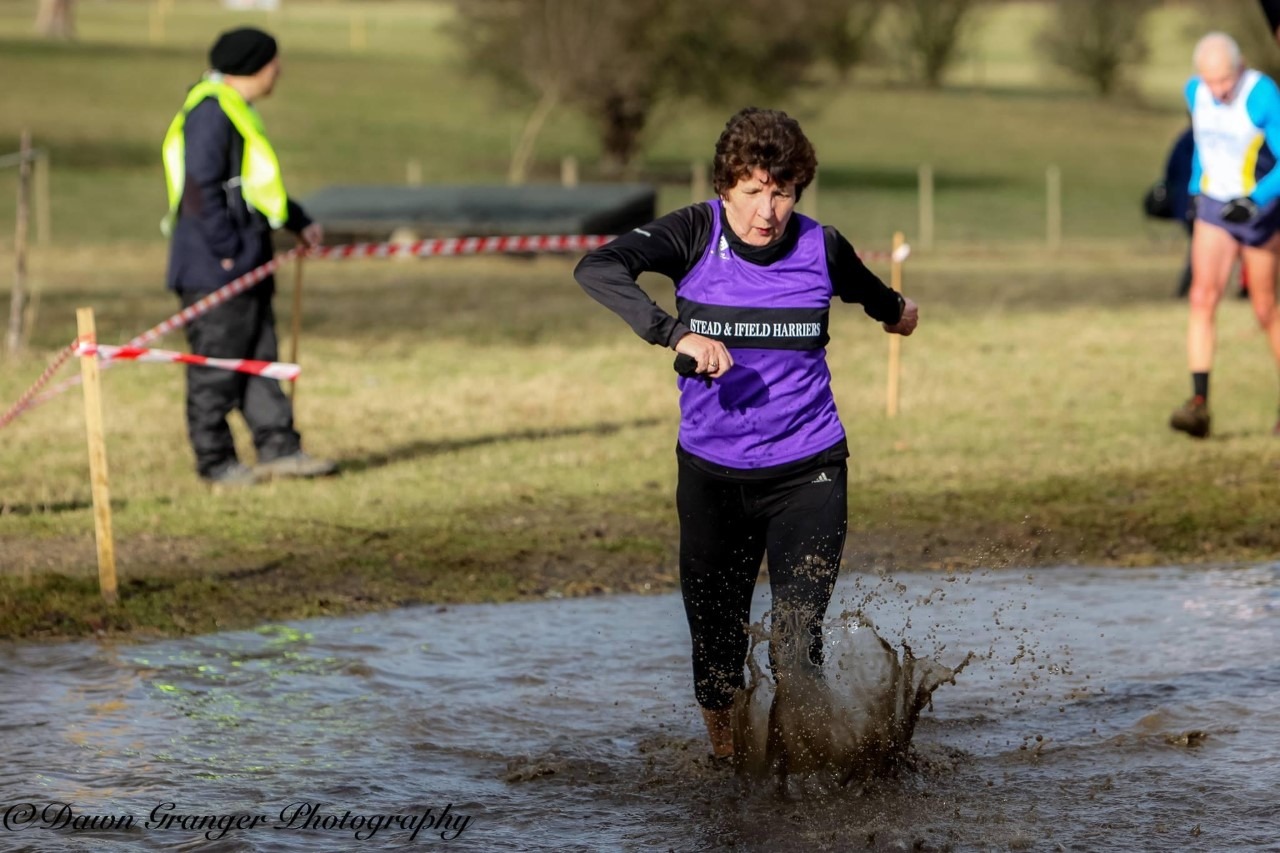 The benefits of running

Running has given me countless benefits – I am fitter than I was at 40 and I can take satisfaction that I am doing my best to keep myself in good shape as I get older. It has also done wonders for my confidence and self-esteem – my children are very proud of the achievements of both me and my husband and I think we provide good role models to them and to our grandchildren. If it weren’t for running, my social life would revolve around people of a similar age and outlook, whereas running encompasses a far wider range of age groups and backgrounds – and that can only help keep me young! Running, and especially going out with a couple of special ‘running buddies’, has really helped throughout the pandemic – it has got me out of the house and having people to meet up with (within the rules) has been invaluable.

Some people have asked if I regret not finding my love of running when I was younger and I’m really not sure of the answer to that. In some ways it has been good to find something new at this stage of my life – when it might have been easy to think that everything was going downhill! As it is, I am still motivated and although my times may have plateaued, I have goals to work to – and that’s got to be good!

The banner photograph shows Joyce and her husband Barry after the 2018 Chester Marathon.

London Marathon | Masters Athletics | runners over 60 | Yorkshire Marathon
← Previous: IAU 24 Hour Championships Milton Keynes 1990 – the greatest race yet Next: Pam Storey - the journey to my 200th marathon and beyond →