An ultramarathon in a shopping mall

Until 1994, nearly all shops in the UK were closed on Sunday by law. Small “corner shops” and newsagents, garden centres, chemists and and garages were allowed to open but large shops were not. This meant that the big shopping centres that had proliferated in the 1970s and 80s stood empty from 6pm on Saturday evening until the following Monday morning.

In 1984, Peter Goodsell of the Road Runners Club1 hit upon the idea of staging a 24-hour race in a shopping centre. The Central Milton Keynes shopping centre, which had opened in 1979, was the longest shopping mall in the world. The ideal place for an indoor ultra race surely?

The size of the shopping centre meant that it offered an indoor circuit about 875 metres long, probably the longest indoor circuit ever laid out2. It also provided protection from the elements. As the race took place in February, an outdoor location might not have suitable. Having toilets right at the side of the course was convenient as it meant less time was lost.

But there were some downsides. The race could not start until 8pm, two hours after the shops had closed. Some competitors remarked that it became quite cold during the night3. And the shopping centre had polished marble floors which made for a very hard surface to run on.

Randi Bromka who was representing the USA said this race was “My worst showing at a 24 hour. The marble floors took an early toll on my legs which were ‘trail trained’.”4 Eleanor Adams commented that it was “awful on the shins and feet.”5 The floor became slippery if drinks or food were spilled.

It was also “a much lonelier race than usual” for competitors used to running 24-hour track races. On a 400m track you can always see what’s going on and runners sometimes form small groups. The longer circuit round the shops meant that runners were more likely to be on their own and couldn’t see runners on other parts of the course.6 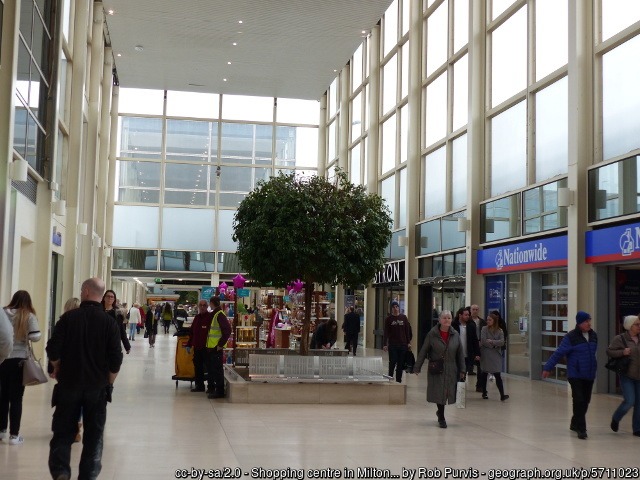 The Milton Keynes Indoor 24-hour Ultra in the 1980s

The race was held three times before it hosted the IAU Championships in 1990. Eleanor Adams competed in all three of those races.

In 1987, the International Association of Ultrarunners had held its first 100km Championships and it had been held annually since then. The popularity of the 24-hour race format led to the IAU establishing an international championship event. Milton Keynes was chosen as the host event for the inaugural International 24 Hour Championships.

The race was also designated as the first UK and English 24 Hour Championships under the auspices of the British Amateur Athletics Board and the Amateur Athletics Association (the English governing body for men’s athletics).9

The race was organised by John Foden10, Race Director, and John Legge, Chairman of the Road Runners Club.

It took place on Saturday 3rd and Sunday 4th February, starting at 8pm.

Adams came into the race as the holder of the 24 hour world best of 149.23 miles (240.169km) which she had set at the HI-TEC International Melbourne 24 Hour track race in August the previous year.

In 2001, Eleanor Robinson (formerly Adams) was inducted into the IAU Hall of Fame. She wrote an article listing her top ten performances. The 1990 Milton Keynes races was third on her list. This is her account of the race, written in 2001.

The 24 hour race is truly an ultra event; to me much more so than the 100km. All the characteristics of a true ultradistance runner are to be found in events of 24 hours and above whereas I regard the 100km as being more akin to a marathon.

The 24 hour at Milton Keynes had been run several times previously and I had always run well there. This first, and so far only, International 24 Hour Championship event, would be the first appearance of a GB team. Some years previously, a journalist had asked me what my ultimate desire was regarding ultradistance events and I had replied that I would dearly love to be able to compete in a British vest but that I could never see it happening. Due to the efforts of John Legge, I had been awarded a GB vest as an individual the previous year, which I proudly wore in Melbourne for the 24 hour race in 1989. This though would be the first occasion when teams were selected.

The number of countries sending teams was limited but with all the best 24 hour runners in the world present the standard was formidable. The same was also true for the 100km Championships at that time.

My aim was to become world champion but also I wanted to push up the record and hoped to reach 150 miles which I had only just missed 6 months earlier in Australia. As this event was held in the UK, I had the help of Nigel, my then husband-to-be, and my eldest son Stephen who had been crewing for me since he was 8 years old. At 14 years old he was probably one of the most experienced handlers present.

I took only drink – water or hot tea – and occasionally a yoghurt. I had a super race with no particular problems until suddenly, without any warning, I was violently sick. I had only 15 miles to do to complete 150 miles with 3 hours to go. Just as I was feeling that at last I would do it…..disaster. I lost too much time, became very cold and my chance had gone. However, the Championship was mine. This, my first, was very special.

There was no big celebration or presentation afterwards; just a warm sense of achievement that I would keep forever. I was convinced that I would soon get to 150 miles but alas it was not to be.

Adams, who was 42, finished in seventh place with 147 miles 1408 yards (237.861km). This was the second furthest distance run by a woman as she still held the world best for the distance, set at Melbourne in 1989. The next woman to finish was Marianne Savage of Centurion Running Club in thirteenth place with 228.112km.

In the men’s race, James Zarei, the 1987 winner, was in the lead at the start of the race but after five hours Don Ritchie had taken the lead, which he held onto for the rest of the race. Ritchie set new indoor world bests for 100 miles, 200km and 24 hours.12 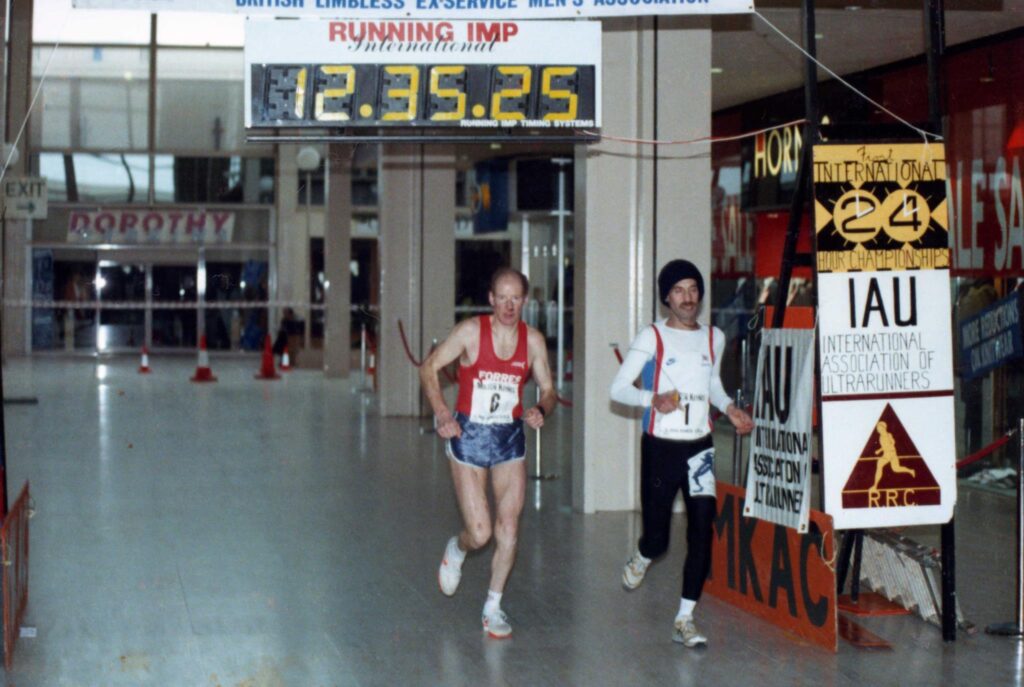 The top ten finishers were:

Adams had finished second behind Bryan Smith of Australia in the Melbourne 24 Hour track race in 1989.

The results published in the Road Runners Club newsletter listed 54 finishers, 12 of whom were women (this is probably the complete list). The other women listed were:

and British women’s success at the IAU 100km World Championships

Thank you to Eleanor Robinson for lending me copies of the Road Runners Club and IAU newsletters.