**Guest post** I met Anne Dockery at the British Masters Athletics Federation Championships in August 2021 where we raced each other in the 1500m (she was faster than me). I had a great chat with her afterwards and was delighted when she agreed to write a guest post for me.

Anne began running at 55, after being diagnosed with bronchiectasis, a lung condition affecting the airways. She was living in the United States at the time. When she returned to the UK in 2018 at the age of 70, she was looking for new challenges and new dreams. In this guest post, she tells the story of her amazing journey in running and the four challenges she set herself.

Thank you for sharing your story Anne.

Towards the end of 2017, despite being blessed with a generally positive outlook on life, I realised I was pretty unhappy and that something needed to change. I had some tough decisions to make.

I was living in Florida where I had lots of friends, an amazing beach on my doorstep and I trained with a wonderfully supportive running group of all ages and abilities. We thought 60 degrees was perfect running weather as we frequently raced in high heat and 95%+ humidity. I swam in the ocean, played tennis over the road, watched sea turtles heave up the beach at night and lay their eggs, and I even caught my own fish for supper sometimes. How could I be unhappy???

In March 2018 I got divorced for the second time in my life and headed back to England so that I could enjoy my two gorgeous grandsons, then three and one, and see them grow up.

By the time I arrived in Bristol I was, to put it politely, emotionally exhausted. I knew no one apart from my daughter and her family but, thankfully, Bristolians are remarkably friendly, and I soon became part of the running family at Ashton Court parkrun. I well remember my friend Ruth befriending me in the cafe queue one Saturday morning and inviting me to come and eat tiffin and cake. Living near this parkrun has been worth its weight in gold!

Apart from buying a house, getting to know Bristol, and playing with Alex and Owen I needed to set myself some new goals in order to keep motivated.

My first challenge was all about a dream. In 2016 I had competed in the World Triathlon Grand Final age group sprint event in Cozumel, Mexico, along with my triathlon coach Willy Moolenaar who was then aged 70+ (she is now 80 and still competing in triathlons). Several of us slower swimmers were taken out of the sea due to some unexpected, dangerous currents. It was disappointing after all the training, but it also taught me a lesson. It was the experience that was important and the people. Walking in a procession with other age groupers from all around the world, each proudly wearing their country’s colours and laughing and celebrating being at this event – it gave us all such a feeling of pride and excitement and camaraderie.

After the swim I was allowed to continue the race and met up with an Australian cyclist who encouraged me to cycle hard and taught me how to draft as we went along. In the run I was able to encourage a runner who was finding the heat a little overpowering and she ended up getting a bronze medal. And that is what it is all about. Being fiercely competitive but also supporting one another in the process. Mighty uplifting. I wanted to do it again.

My coach, Willy, had become the World Duathlon Champion in her 70th year and had described the exhilaration and pride she felt when getting her medal whilst holding the USA flag. I had to give it a go! When I arrived in Bristol one of the first things I did was buy a good, light road bike and a car. I headed for a Sprint Duathlon Qualifier at Oulton Park on 29th April, 2018. The scariest part was reacquainting myself with driving in the UK after the huge, wide roads in USA! I managed to qualify despite my chain coming off early on and wondering how I was going to get up that hill again on the last lap. All I had to do was finish as I was the only 70-year-old in the race. 10 weeks later I competed at the ITU Duathlon World Championships in Fyn, Denmark in the age group sprint.

I did not think I had a hope of winning as the opposition were nearly all seasoned International Duathlon competitors. I checked out the bike route with some lovely ‘young’ age groupers the day before and we also practised running through the rather complicated transition area. The race went well but I was overtaken by the German competitor towards the end of the bike section. Could I run fast enough to beat her?? Yes! I flew through the tricky transition, but she made an error. All I had to do was run hard to the end…and I did!

I cannot adequately describe the feeling when I realised I had become World Champion. So proud, amazed, ecstatic and unbelieving. I still feel it was a kind of dream…and I would like more dreams like that one! This is why I say if I can do this, then so can you! Yes, I trained hard at my running, but in the end, it came down to little things like checking out transition and knowing where my bike was racked. I still get a rush of joy remembering going up on the podium proudly waving the Union Jack. Priceless.

All my training for the Duathlon added to my overall fitness and I was now on a roll. The day after my 70th birthday I ran the Bristol 10k and managed to hit 49:55…my aim…under 50! I felt unstoppable!

My second challenge was to run track. I joined Bristol and West AC and, with the help of Chris Elson, I managed to perform with some success in local Masters events and in August 2018 I won gold in the 400m at the British Masters Athletics Championships. I met seasoned and highly accomplished athletes all of whom were so generous in giving me guidance and encouragement. In September, I set off to the World Masters Athletics Championships in Malaga, Spain, feeling so excited at the prospect of racing alongside these amazing men and women. For me everything was shiny, new and exciting. I had no previous performances to beat and therefore no pressure apart from making sure I kept to lanes and followed the rules.

I was, of course, quite terrified at times because you are really exposed on a track but once the gun goes off you just run as hard as you can. I managed, much to my amazement, to bring home Bronze medals in the 800m, 1500m and the 5000m. But the highlight was running the team 400m relay. How proud to be in the same team as world class athletes Pat Gallagher, Pauline Rich and Angela Copson. We not only got Gold but also set a new British record. WOW! My thanks go to these amazing ladies who helped to get me through the intricacies of the call room, lane discipline and horrible attacks of nerves.

The medals are the icing on the cake, and they are what helps you to train hard when you least want to get out for a run, but the team spirit and camaraderie is what makes the whole trip worthwhile. 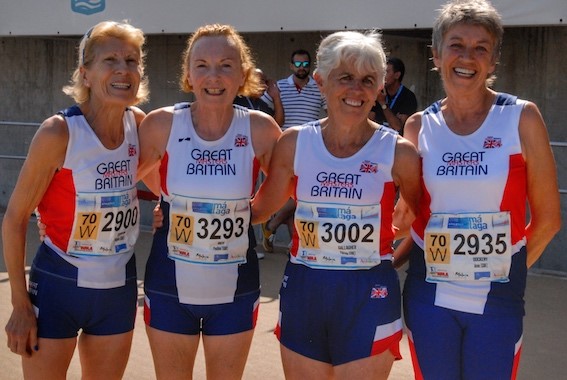 My third challenge was to qualify to run the Birmingham 10k 2019 in an England vest. I managed to qualify at the Telford 10k in the December 2018 and was so proud to represent England and win the v70 age category. In December 2021, I ran the Telford 10k again and qualified to represent England at the Great Bristol 10k in September 2022. I am looking forward to wearing the England vest in my hometown. 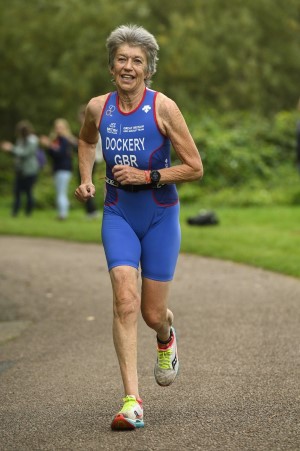 Training during the pandemic and a fourth challenge

During Covid, I was able to continue my running training with my present coach, Keith Brackstone, who designed a training schedule to keep me motivated. That was a life saver. I would often look at the targets he had set, groan to myself and think, ‘no way can I achieve those times’ and then out I went and tried my best. All the decision making was taken away. Hurrah. During the first lockdown I had much more time for rest and recovery as my grandparenting duties sadly came to a halt for a few months.

In 2020, I was expecting to train for another Duathlon World Championships in the sprint distance, but Covid put the lid on that adventure. I had asked Andy Wadsworth to help me improve my bike skills and improve my strength. With his encouragement and once lockdown had ended, I set myself the fourth challenge of completing a Standard Duathlon (10k run/45k bike/5k run). It took me over 3 1/2 hours, but I managed it last October at the Calfman age group qualifier event (pictured) and qualified for the European Standard Duathlon Championships in September 2022 in Bilbao, Spain.

It has been an amazing journey which I hope to continue for years to come. In June, I am heading to the World Masters Athletics Championships in Tampere, Finland, so that I can see my friends, have a holiday and enjoy the excitement of international competition.

Since turning 70 in 2018, Anne has been in the top five in her age group in the UK most years for track distances from 60m to 5000m and road distances from 5k to 10k. You can see all her results on The Power of 10 website (British Athletics).

Photos:
With thanks to Alex Rotas and Tom Phillips for permission to use their photographs.

More stories of women runners in their seventies

Sandy Poole who was 71 when I interviewed her in 2016. Sandy was also diagnosed with bronchiectasis but at a later age than Anne.

Christine Oldfield wrote about her running story and then about her experience of racing against Angela Copson at the British Masters Athletics Federation 10km Championships.